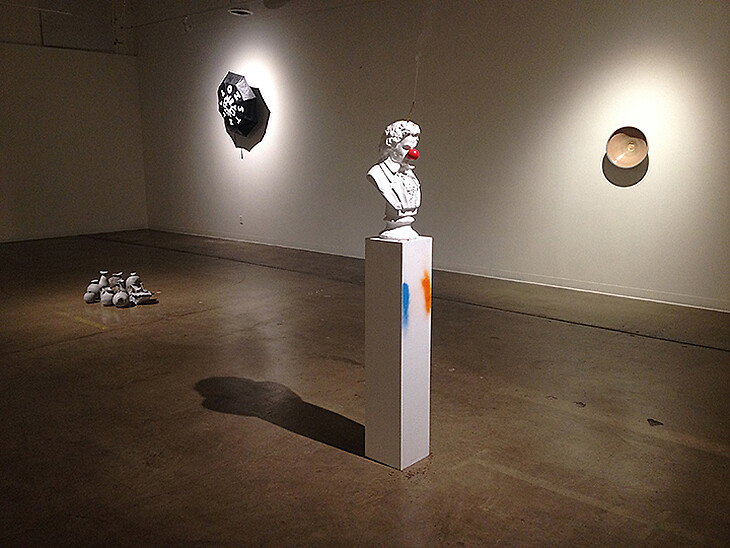 Conduit Gallery is honored to announce a solo exhibition of work by Dallas based artist, Jeff Gibbons; his second at Conduit Gallery. With attenuated gestures and tenacious device, Clown Ambulance presents work that mirrors the intellectual forces that drive Gibbons’ studio practice. Earthen materials such as clay and found objects are divorced of their practical usage and become part of a resonant feedback loop as Gibbons reaches into a spiritual world he himself acknowledges may not exist. Getting to, and encountering the possible fissures of existence become paramount and with that, each work, whether it be sculpture, painting or video is the precise moment of an existential teeter-totter.

Everything can feel like an act, looking back on the different people I’ve been.

“I didn’t end up marrying the bastard, and that has made all the difference.”

Everything is imprinted with something, and/or the loss of something else.

I don’t seem to choose what I love.

Do you still dream about having a farm?

I think a lot of people do, nowadays.

Jeff Gibbons earned a BFA from the University of Tampa, Florida (2010) and an MFA from the University of Texas Arlington (2013) where he studied Intermedia. In 2016, Gibbons was the recipient of a grant from the City of Dallas Office of Cultural Affairs; created the voicemail driven interactive project, There are no stray hairs in old movies, the inaugural show for 1-800-789-2228; collaborated with Gregory Ruppe on the set for Masque of Red Death, a ballet performed at the Majestic Theater (Dallas, TX) by the Dallas Neo-Classical Ballet and composed by Jordan Kuspa; and co-created The Culture Hole, with Greg Ruppe. In 2015, Gibbons was an artist in residence at the Goss Michael Foundation (Dallas, TX) and presented a solo exhibition Auto Relativity Kinetotron. Additional recent exhibitions include; The Epitome Institute, San Antonio, TX (2015); Conduit Gallery, Dallas, TX (2015); Oliver Francis Gallery, Dallas, TZ (2013, 2012); Hiroshima Art Center, Hiroshima, Japan (2015); galleryHOMELAND, Houston, TX, in collaboration with Greg Ruppe (2015); Reunion, Zurich, Switzerland (2015); the Dallas Biennial, Dallas, TX (2014) and the Berlin Becher Triennial, Berlin, Germany (2013). Gibbons, along with frequent collaborator Justin Ginsberg were among the recipients of the 2015 Master Mind Awards by the Dallas Observer.﻿﻿