Noodle in the Wind 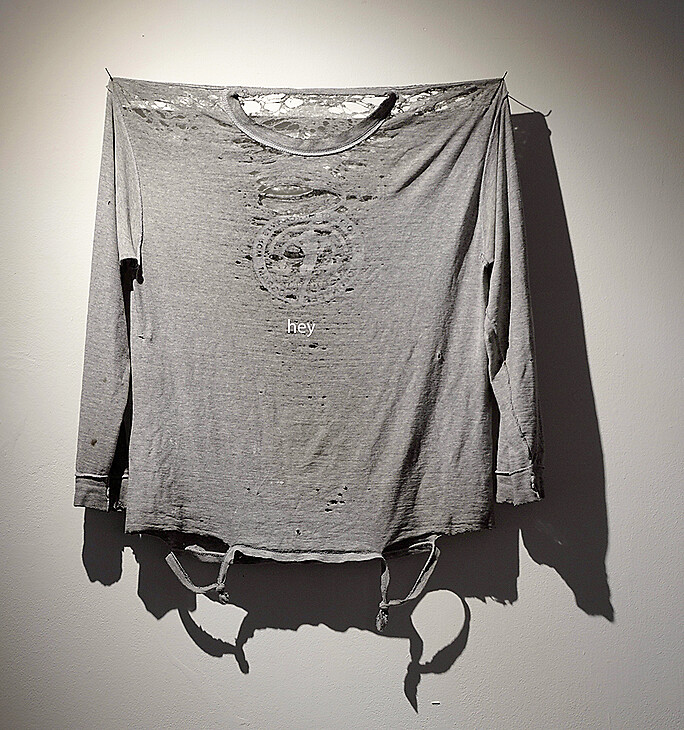 Conduit Gallery is honored to present, Noodle in the Wind, a solo exhibition by Dallas based intermedia artist Jeff Gibbons. Tenacious in his use of cast off objects, Gibbons coaxes the thread from the threadbare, and offers as the artist states, “a freeze frame of some place I’m in or have been.”

Noodle in the Wind

I can say with full truth that I love you. I may not like to be around you though, sometimes… As I’m writing this, the wind is blowing hard outside the room- I want to focus on how the wind can be gentle and moving, but I’m remembering that wind is also scary sometimes. Sometimes I forget to mention that I’m afraid; because being in the wind can mean going wherever the wind takes me. I can hide from the wind in a building, but then the building is in the wind, so I’m still in the wind. I can’t actually see the wind, I can only feel it and view its impact in things blowing about. The wind also corrodes over time, just like the touching of any two things. Because the planet is a ball, somewhere the wind must be not blowing, like inside a hurricane. I can also attempt to harness the wind, redirecting its force so it will work for me. But this isn't real wind I'm talking about, so I'm unsure what that means. Our minds are perhaps a product of the wind. What would we be if we were born into a world of stillness? Not this. Not us.

Jeff Gibbons earned a BFA from the University of Tampa, Florida (2010) and an MFA from the University of Texas Arlington (2013) where he studied Intermedia. In 2017, Gibbons was an inaugural artist in the Proximidad exchange which included a residency and exhibition at Ceramica Suro in Guadalajara, Mexico and an exhibition at the Power Station in Dallas, Texas. Additional solo exhibitions and collaborative projects include; Grubnik and Suzanne, a collaborative installation with Gregory Ruppe, Nasher Sculpture Center, Dallas, TX (2018); Le Sud Bébé, Mop and Dream Body go to France (collaboration with Gregory Ruppe), Marseille, France (2018); and Museo de la Ciudad de Querétaro, Mexico (2017). In 2016, Gibbons was the recipient of a grant from the City of Dallas Office of Cultural Affairs with which he created the voicemail driven interactive project, There are no stray hairs in old movies; collaborated with Gregory Ruppe on the set for Masque of Red Death, a ballet performed at the Magestic Theater (Dallas, TX) by the Dallas Neo-Classical Ballet and composed by Jordan Kuspa; and co-created The Culture Hole, with Gregory Ruppe. In 2015, Gibbons was an artist in residence at the Goss Michael Foundation (Dallas, TX) and presented a solo exhibition Auto Relativity Kinetotron. Additional recent group exhibitions include; PRP, Dallas, TX (2018); Beefhaus, Dallas, TX (2017); The Epitome Institute, San Antonio, TX (2015); Conduit Gallery, Dallas, TX (2015); Oliver Francis Gallery, Dallas, TZ (2013, 2012); Hiroshima Art Center, Hiroshima, Japan (2015); galleryHOMELAND, Houston, TX, in collaboration with Greg Ruppe (2015); Reunion, Zurich, Swizterland (2015); the Dallas Biennial, Dallas, TX (2014) and the Berlin Becher Triennial, Berlin, Germany (2013). Gibbons, along with frequent collaborator Justin Ginsberg were among the recipients of the 2015 Master Mind Awards by the Dallas Observer.