hearts, hands, and other members 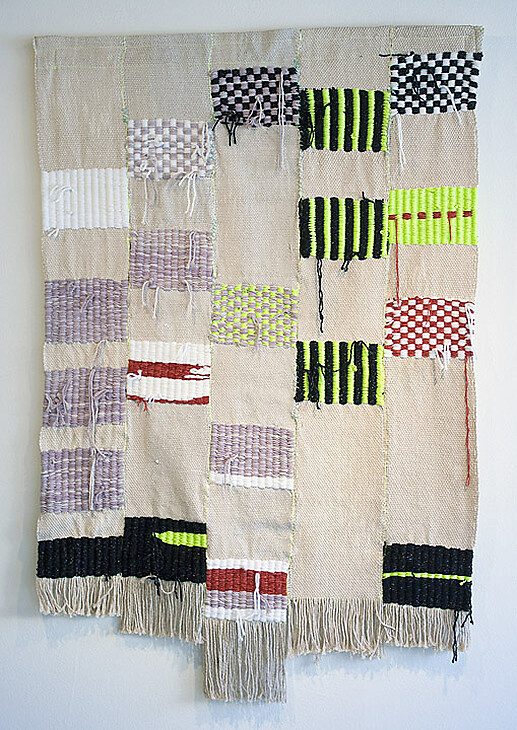 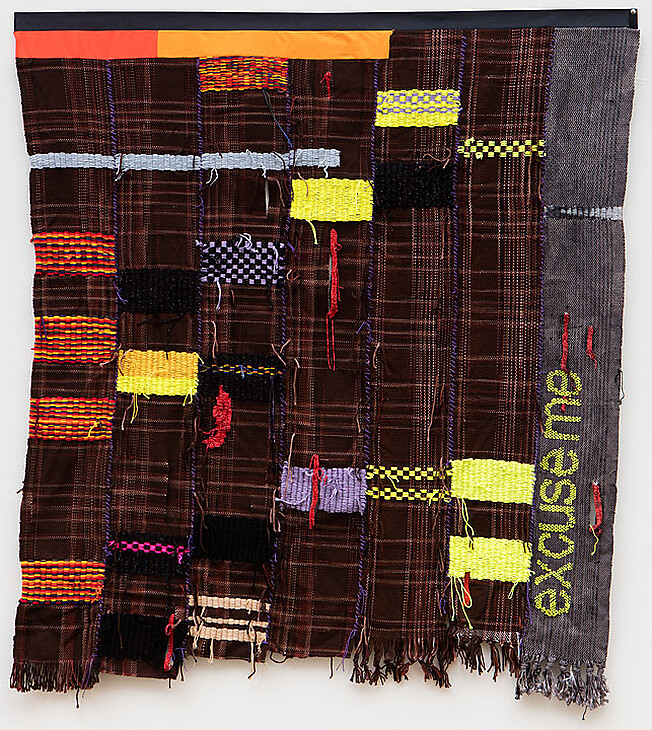 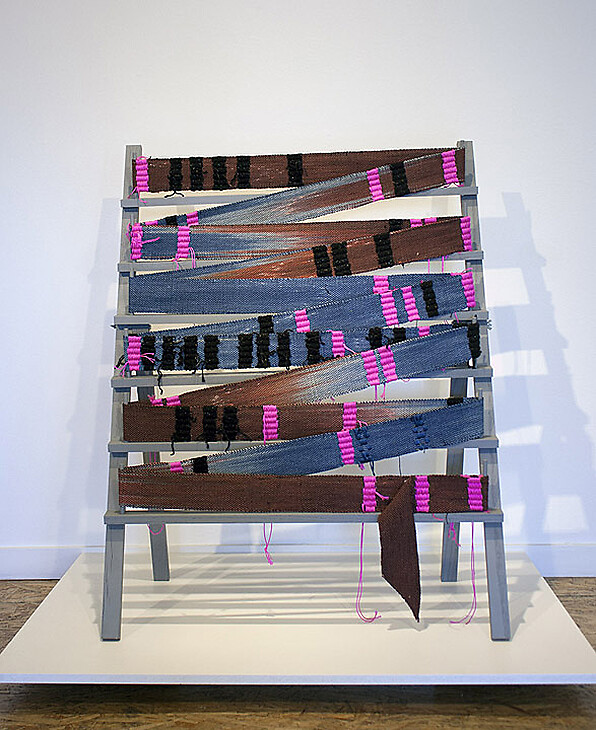 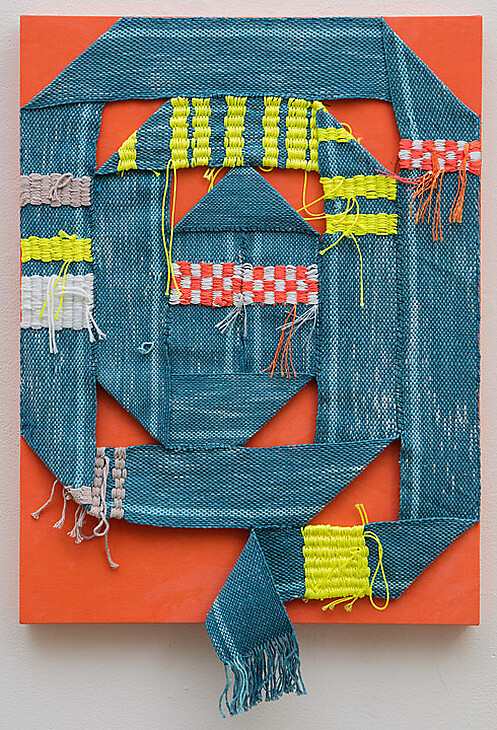 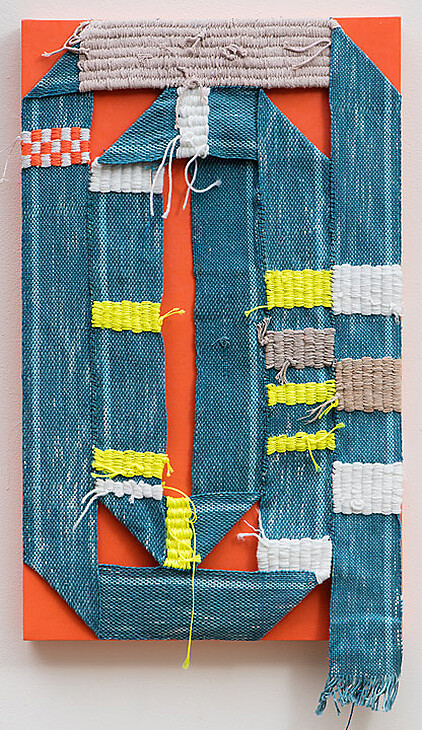 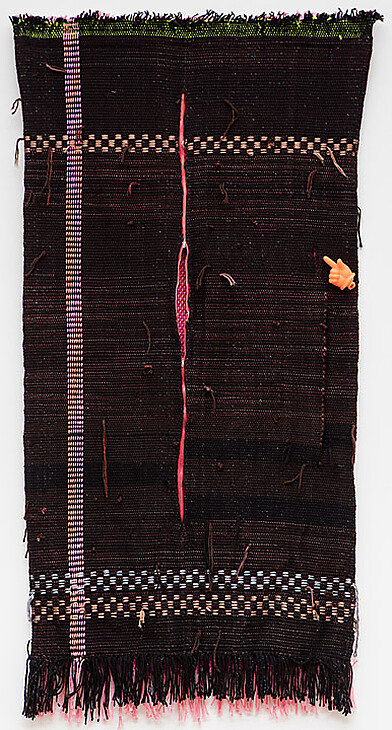 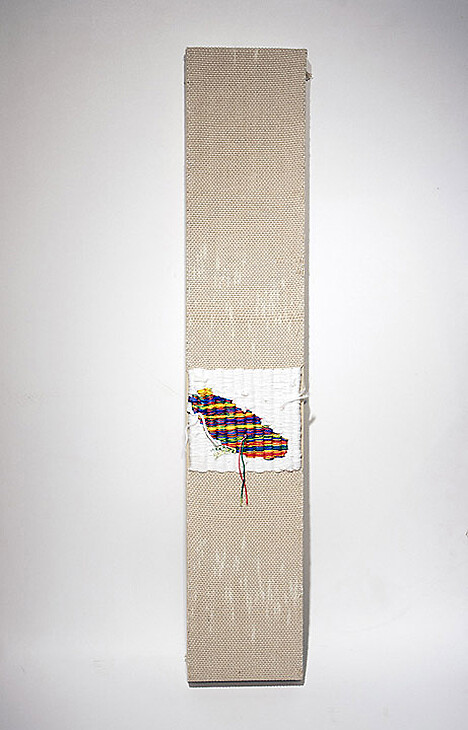 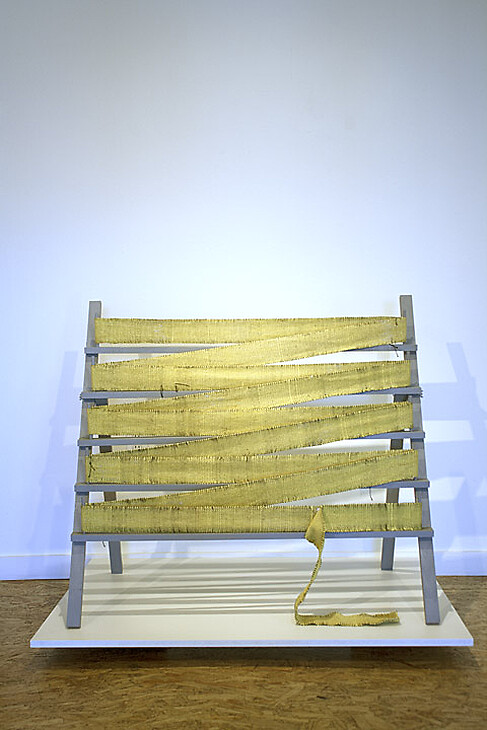 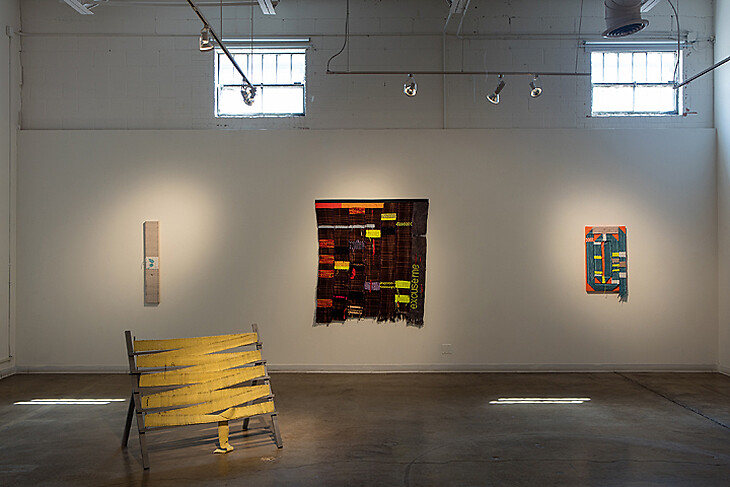 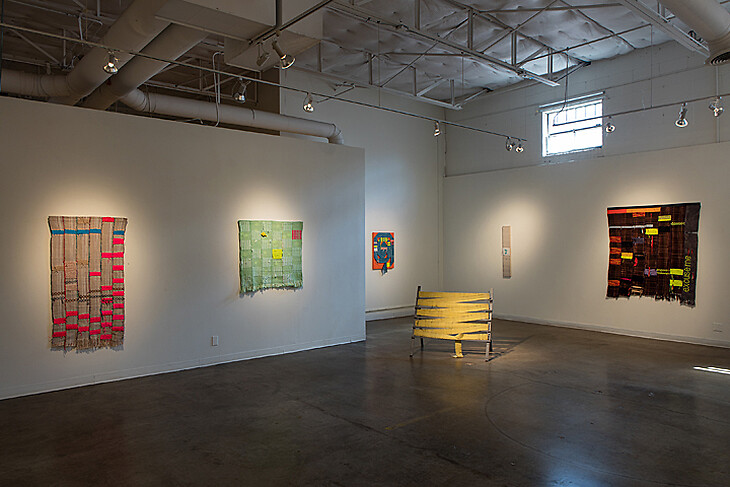 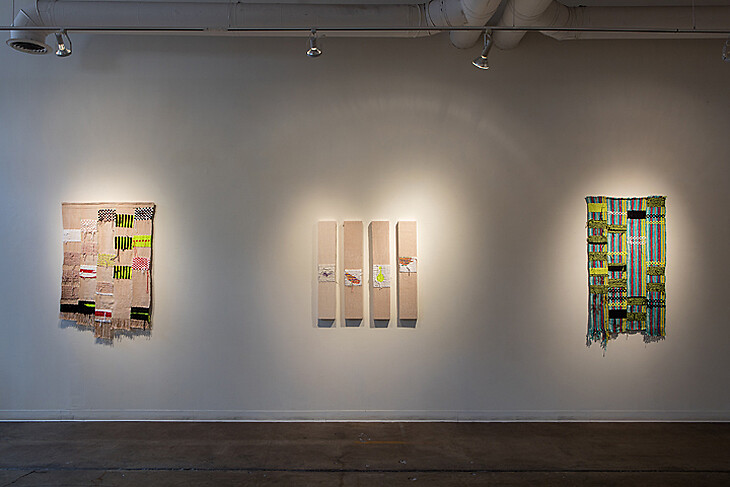 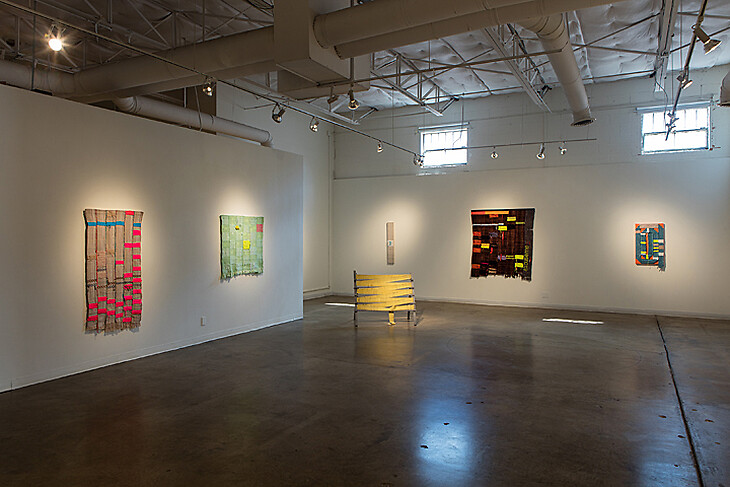 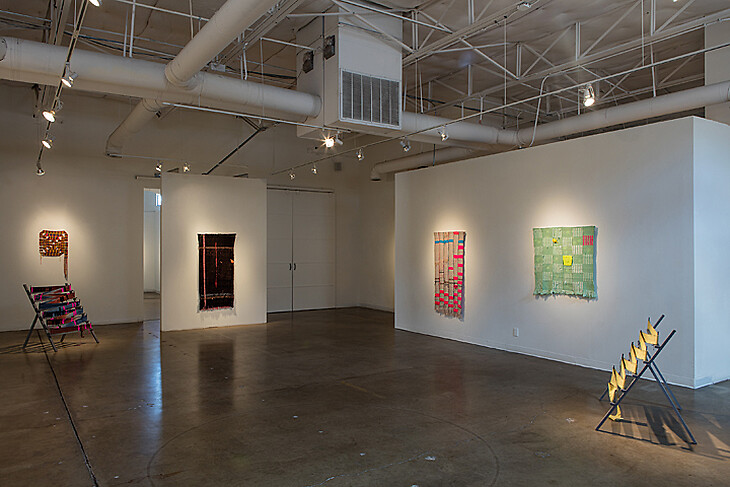 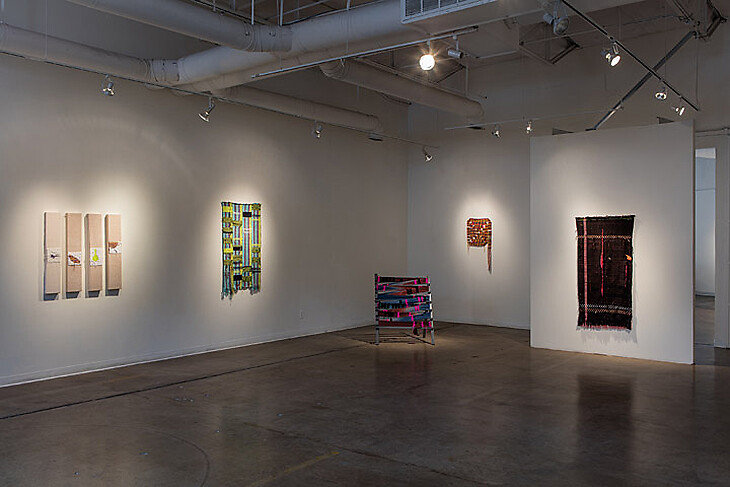 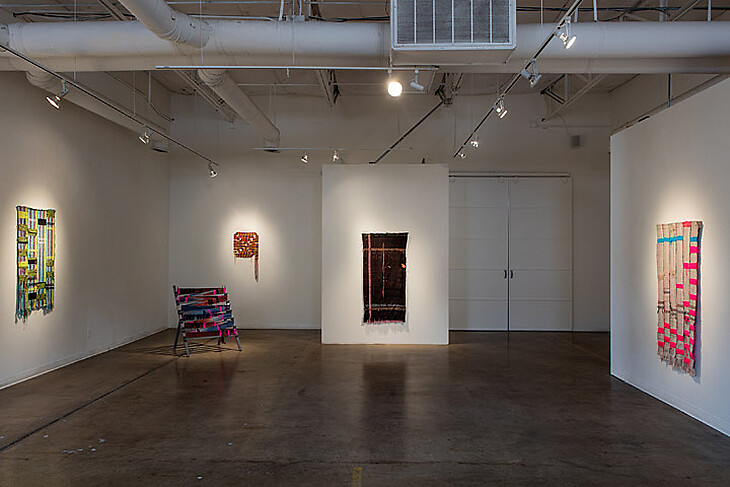 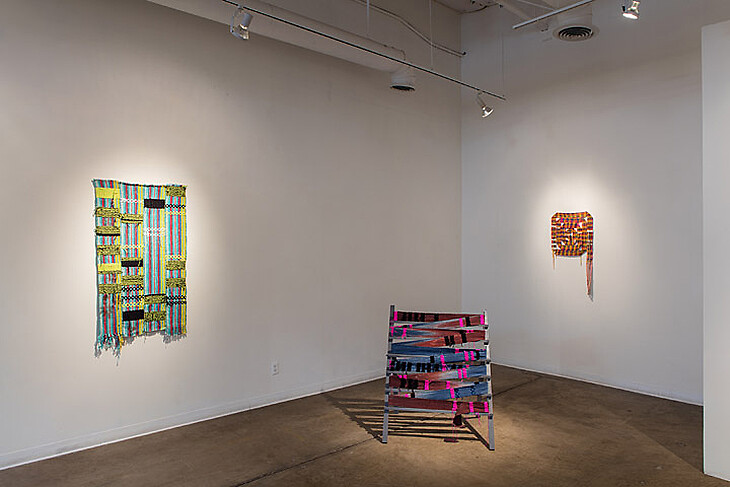 Taken with the idea that textiles can deliver as much information as the written word, Diedrick Brackens encodes meaning into the multi-colored and multi-patterned cloths he weaves. Brackens dyes his textiles with items found in most American homes (e.g., wine, tea, bleach.) Though common, Brackens believes these materials carry symbolic references that transcend the household and speak to both his own personal relationships as well as universal human interactions. Universality is further articulated by the various cultural references Brackens pulls from including; traditional West African kente cloth, the American quilting tradition, embroidery, and European tapestry.

In leave soil behind the ear – for AA, Brackens weaves an intimate portrait of a particular moment between lovers and at the same time, questions its propriety. In contrast, Brackens’ tired of talking, a continuous length of hand-woven fabric evokes caution tape as it is wrapped across a wooden sawhorse, a stand-in for a police barricade, and a reminder of the violent times in which they are used. Brackens’ works dance between the old and the new, the celebratory and the domestic. They bring to light dark echoes of our country’s history as well as represent cloth as a mechanism for healing; staunching wounds, bringing comfort and ultimately, joy.

A Texas native, Diedrick Brackens earned a BFA in Fiber Art in 2011 and an MFA in Textiles from California College of the Arts, San Francisco in 2014 where he was awarded the Barclay Simpson Award. Beginning in the fall of 2015, Brackens will begin a new position as Assistant Professor and Program Head of Fiber at the CaliforniaStateUniversityat Long Beach School of Art. Exhibitions include: the 3rd Ghetto Biennale, Port-au-Prince, Haiti (2013); SOMArts, San Francisco, CA (2014); the Berkeley Art Museum, Berkeley, CA (2014); Johansson Projects, Oakland, CA (2015); Dean St. Gallery, Marfa, Texas (2013); Peters Valley Craft Center, Layton, NJ (2012); and the Museum of Geometric Art, Dallas, TX.